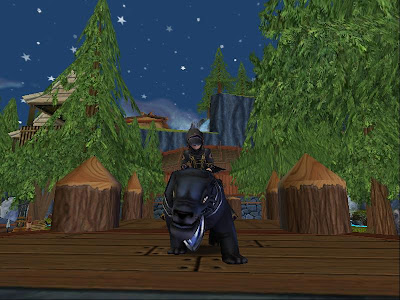 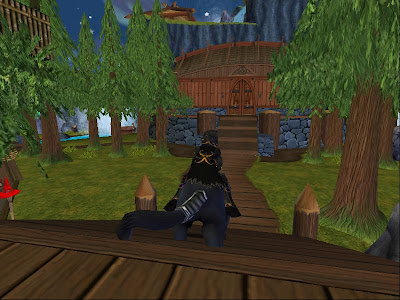 We've selected the perfect spot for our new store, located in a field right between two rivers. 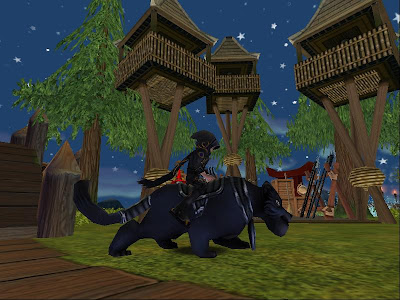 Here's the store itself. 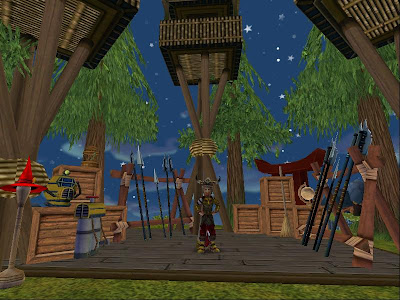 We sell all sorts of things here. From swords and spears, to clothes and scuba gear. If you need anything, our shopkeeper will be happy to help! 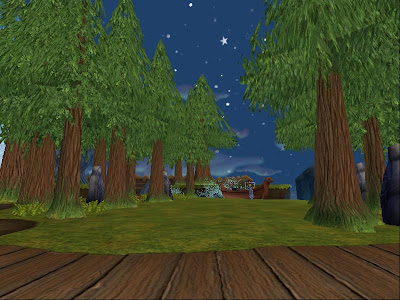 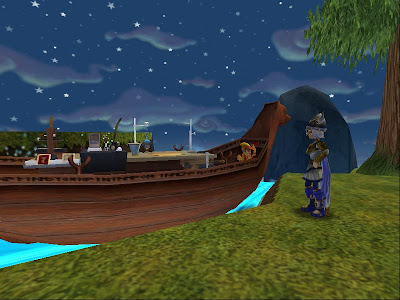 It appears a new shipment of reagents has just come in. Our other mannequin should be able to sort this out. Let's keep exploring! 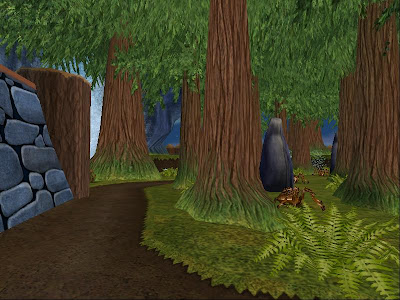 But let's not go this way.... It's full of dark and dangerous creatures. Like spiders, treants, frost cats, and trolls. 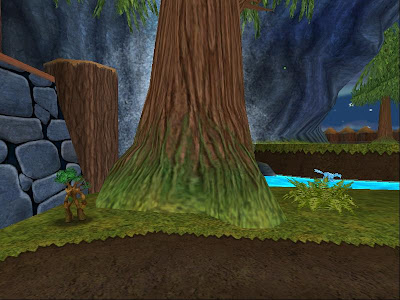 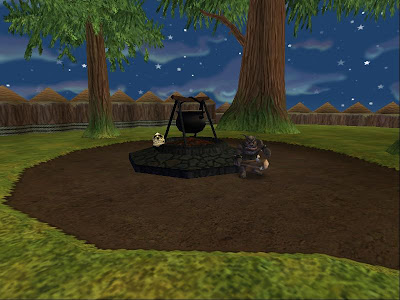 Plus I haven't finished it yet. 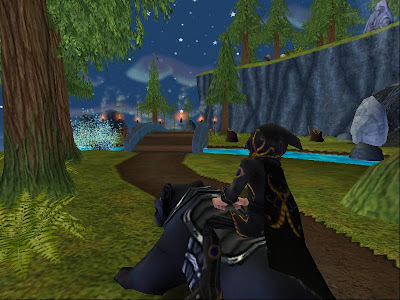 However, I have finished this part. The farming village! Let's go check it out. 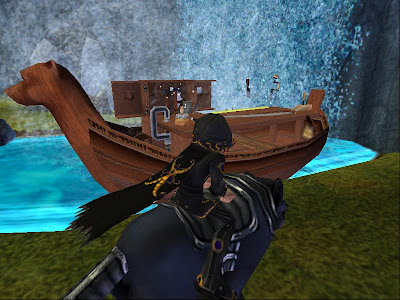 But wait! Another shipment of items! What? Oh, right, I'm in the middle of a tour! Fine then, the farming village. Right. 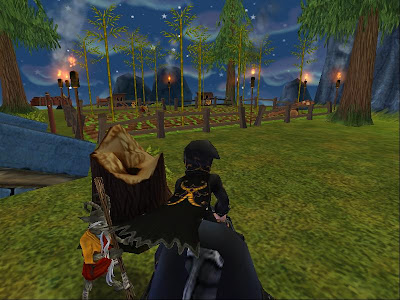 No goat, I don't want any free samples of bamboo, but thank you anyways. I could take a free sample of that though.... 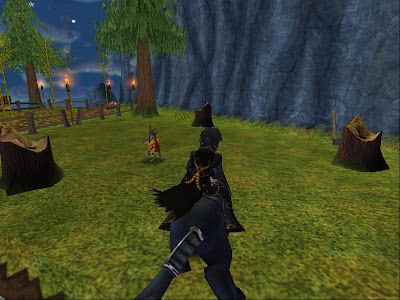 What a pleasant town. 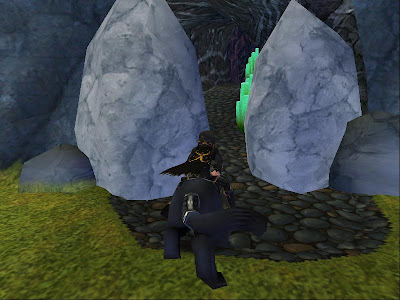 But, there is one dark part of this town. 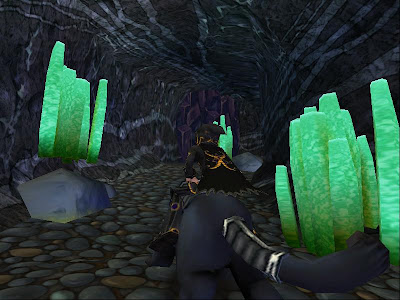 A dark cave, where dwells the most horrifying creature of all time. 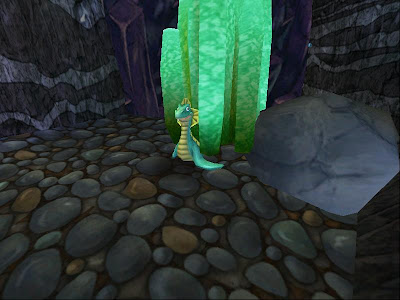 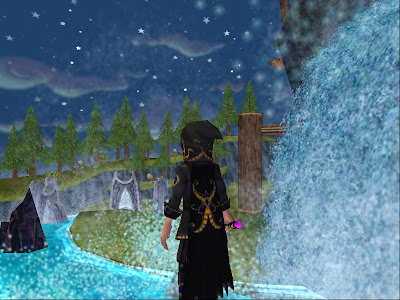 What's that?
Hmm. Well, this post is getting pretty long, and I haven't finished that part, so....
Find out next time, on the adventures of Malorn!
Posted by Malorn Ghostrider at 1:58 PM 2 comments

Teleporters. Ever since they came out, people have been using them with amazing results. One of the best parts of the teleporters are their ability to connect houses together. For most people, the houses they link together have no theme. They may link a Life House and a Krokotopian House together. While this certainly won't hurt your house's decoration, it's cooler to make the connected houses have a theme. For instance, Island Getaway and Sunken Palace. Put the teleporter at the waters edge, maybe next to some scuba gear. This gives the impression that you're actually diving into the depths, instead of just jumping on a teleporter. You could also try to match the teleporter color with the water (blue), and use a carpet trick to place it in the water. Here's a list of a bunch of other teleporter linked ideas.

Island Getaway/ Sun Palace/ Fire House
Make the entrance of the house your Island Getaway. Decorate it like a jungle house. In the secret tunnel area of the house, you could put a teleporter at the point where the boulder breaks through the floor (there's a sort of waterfall thing there). You could make this teleporter go to the secret cave where the monkey lives in the Sun Palace. This gives the impression that you jumped down the hole, and dropped into this cave. You could then have another teleporter in the cave (maybe guarded by a few tiki statues) that leads to your fire house. This could be like the entrance to a volcano.

Sun Palace/Sultan's Palace/Krok or Balance Houses
The Balance school has a lot to do with the sun. So, what you could do is put three teleporters in the three rooms marked by the suns upstairs. Since the middle sun goes outside, you could put the teleporters to the left and right of the sun. 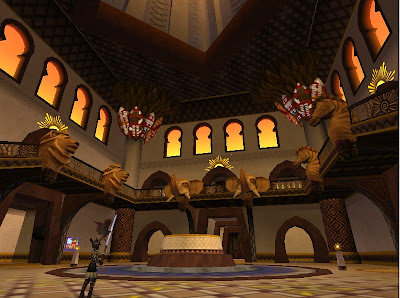 (Picture borrowed from here)
These teleporters could link to the Sultan's Palace, Balance House, or the other desert themed houses. You could make this house a search for the hidden suns (maybe hide some treasure in each of the four houses? You could make this treasure sun themed, like a sun icon).
Other possible houses could be....
Mixing the large and small houses of a world (Wooded Cottage/Royal Playhouse)
Mixing a school theme house and a world house (Fire/Dragonspyre House, or Balance and Krokotopian House)
Making Secret Areas (Explore a lake in a house by making a teleporter to the Sunken Palace, or a volcano, or a mountain top (Teleporter from Dragon's Fjord to Ice House)).
The possibilities are endless!
Happy House Decorating!
-Malorn
Posted by Malorn Ghostrider at 1:06 PM 0 comments

Actually, of the many things happening in the spiral, me making a post isn't all that exciting. What is exciting is all the new stuff. Like....

The Nightmare Pack! Includes new housing, pets, mounts, and gear! A list of all the drops can be found here!

The Safari Pack! Includes the Hornocerous Mount (2 player mount), Cheiftain gear, a giraffe pet, and an awesome house! A tour of the house is here!

And, all of these houses come with new teleporter tapestries, that take you to useful places in Wizard City (Bazaar, Arena, etc).

I also made a new central account, and entered my latest house in Better Homes and Gardens. Unfortunately, my computer is acting up, and I haven't been able to get on Wizard101 Central for a few days (an error screen pops up every time I try to go to it). While my computer does have some new issues, it's gotten rid of some older ones. For instance, my housing items aren't bright red anymore! While my computer is a bit faster now, I'll miss being able to predict the future using the loading signs that were always present. So just keep an eye out for the subjects of my many prophecies (including Dill Piggle, Blacksmith Tongs, Robe Stand, and Golden Unicorn).

I've also become the housing teacher at Shadowrider Academy! Be sure to come to opening day, on Sunday October 23rd, at 7pm Eastern Time in Ravenwood, realm Scarecrow 1.

And, the last bit of news, WE'VE REACHED 50 FOLLOWERS! WOO! No, I probably won't be holding a contest (sorry). This is mostly because in my last contest, I had issues getting the prizes to the winners (one refused to contact me in any way, so....). I will probably be holding a party of some sort. More details on that later. I'll also try to be making more posts. But, remember that a lot of my housing posts will be at Housing101.

That's all for now, so Happy House Decorating!

Got my Voting Reward! Yellow Elf!

For all of you who voted, there's a yellow elf to win! Go check your emails and claim your prize!

P.S. Sorry for the short post, I'll make a longer post once of these days....
Posted by Malorn Ghostrider at 4:39 PM 1 comments

Hello once again. I know I haven't been posting much on this blog, but that doesn't mean I've disappeared. These days, I haven't done much but work on my houses. I've decided to put most of my housing posts on Housing101. In case you haven't heard of Housing101 yet, it's a new blog of mine, that discusses nothing but housing. The main difference between this and that is that Housing101 accepts co-authors! We have 12 authors now, and you could be one too! Be sure to check out Housing101, as I will be posting there much more often.

Housing101 is completely dedicated to housing. For those of you who haven't decorated much, we have an entire page devoted to lessons on how to use housing tricks. For those more experienced house decorators we have a page of house ideas (even bigger then the one here)! But that's not even the best part. We also have a massive Housing Gallery, with houses ranging from Deserts and Swamps, to Haunted Houses and Space Stations. So go check out! Now! Click the giant letters!